The nexus between architecture and landscape – the interstitial space – is a fascinating place for a designer. It is the very edges of things; in nature, in objects and in buildings that are always the most interesting places to me. In the natural environment, it is that fuzzy boundary where the ocean meets the sand, the estuaries where freshwater meets saltwater or where the open forest turns to open grassland. In nature, edges are typically the most rich and fertile areas as resources are available from two different environments.

Above: Natural edges are rich with detail and stepping scale; Macro, Meso, Micro.

Similarly, edges in the built environment can offer a richness to the spaces adjacent by shaping the human experience through a variety of design ‘moves’ and/or architectural details such as a feathered edge, protection from the sun or a place to sit.

With this in mind, what I’d like to focus on is the interstitial both at the edges of buildings and site as well as the spaces immediately adjacent.

Typically, if not already briefed, at FJMT we tend to weave public space into our projects where possible to help ‘ground’ them to the site but also to connect them right into the context. I’m not talking in an esoteric way about repaving footpaths here (which we also do) but actually making new public spaces of some measurable benefit to the community or perhaps a campus.

Sometimes there’s a clear visual and physical delineation between the building and the related external space, in other projects they tend to overlap and combine, however most commonly we find they tend to inform each other.

Many years ago in a volume of the magazine Places – by the way, the archive is available to download – there was a great definition of these three approaches, or ‘modes’ as the author (Reuben Rainey) called them, in the relationship of architecture and landscape that captures a way of considering the interstitial space.

These modes are: Contrast, Merger and Reciprocity.

I’ll just briefly explain them and then you may want to consider these modes while viewing the selected buildings below. The first mode, Contrast, is fairly obvious and is considered where architecture is juxtaposed with the natural or cultural landscape. Acting as a counterpoint, the building exerts an visual and physical influence of the immediate context through a combination of scale, profile, colour and finishes. There is no transition into landscape at all so that the intrinsic qualities of each are accentuated via Contrast.

CONTRAST: sitting in a clearing the pure form and detailing separate the building from the landscape (Villa Savoye, Poissy by Le Corbusier)

CONTRAST: crisp white shells don’t have much trouble standing out from the harbour setting (Sydney Opera House by Jørn Utzon)

CONTRAST: the ovoid form, accentuated by a shadowline base separates the building from it’s context (City Hall, London by Norman Foster)

Above: Selected built precedents contrasting with the surrounding context.

The next mode, Merger, is the polar opposite and is where architecture blends or appears integrated with the natural or cultural landscape. Reuben notes that in this mode the building form may reflect the surround topography or even be placed underground to entirely merge with the landscape. 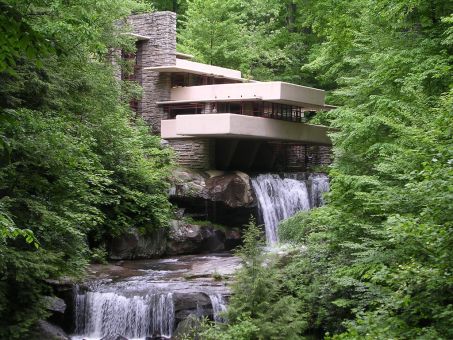 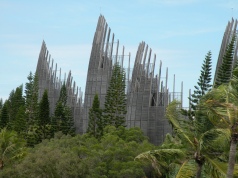 MERGER: laminated timber ‘cases’ in the background of the nearby intertidal zone (Jean-Marie Tjibaou Cultural Centre by Renzo Piano)

Above: Selected built precedents merging into the landscape.

Reciprocity is the third mode and most commonly found. Architecture influences, modifies and shapes the landscape and landscape influences, modifies and shapes the architecture. Each mutually benefits which tend to lead to richer, more complex buildings and spaces. The Reciprocity strategy may be as direct and formal as an extension of the building grid into the landscape or more subtle where the external space transitions into the building and interlocks the interior and exterior. 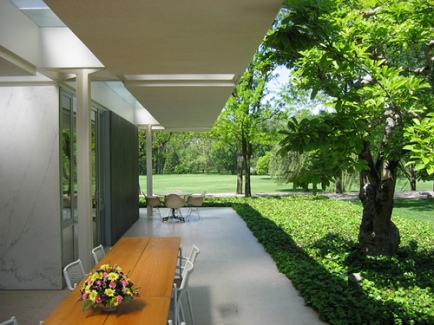 RECIPROCITY: are we inside or outside? (Miller House, Columbus by Eero Saarinen, architect and Dan Kiley, landscape)

RECIPROCITY: the ‘borrowed’ landscape as an interior elevation (Chapel on the Water, Japan by Tadao Ando) 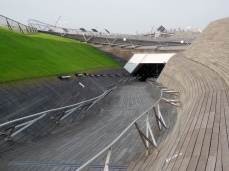 RECIPROCITY: a path warps into a roof (Yokohama Terminal by FoA)

Above: Selected built precedents in which the architecture and/or landscape are interdependent.

Of course, in the complexities of design there are contradictions. These three approaches often appear together in one building to accentuate each element in response to formal considerations or perhaps react to functional or climatic conditions. From the examples illustrated above, it could be argued that Fallingwater simultaneously merges and contrasts with the site context. Nevertheless, these modes are readily identifiable if you pause and look closely.

Endnote
This is a modified excerpt from my presentation at the Australian Institute of Architects Design Now mini-conference held in December 2011. Also, I’m planning a follow-up to this article with a focus on some of the projects I’m involved with at FJMT… ps. Happy New Year! 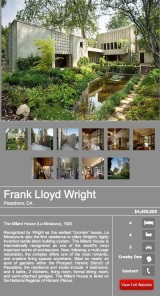 For architectural sticky-beaks Architecture for Sale lists residences (primarily in the US) designed by architects just waiting for you to put down a lazy million… or four. There are some notable houses featured including (at the time of writing) the masterful Esherick House by Louis Kahn, the Desert Nomad House by Rick Joy (a steal at US$875,000) and Craig Ellwood’s Broughton House built in 1949.

My pick: The Millard House (aka La Miniatura, 1923) by FLLW. A sublime residence and gardens for only US$4.4 million! If you really are interested, delve into the real estate details, including the previous sale prices.